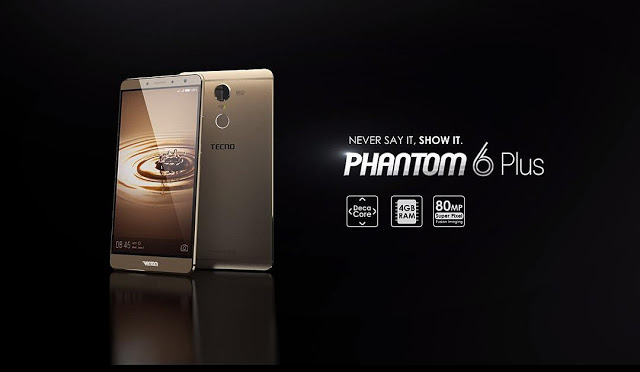 The Tecno Phantom Plus 6 was unveiled on 25th September, 2016 at the Burj Khalif in Dubai alongside Tecno Phantom 6. These new flagships from Tecno mobile are more advanced in design and function than the like of Phantom 5. Lets say Tecno have loved the pattern of Samsung mobile and Apple releases as in Galaxy and its EDGE and iPhone series and its S versions.

The Tecno Phantom 6 Plus comes with a more powerful specs, specifications. It is a 6-inch capacitive touchscreen Android smartphone powered by a Deca-core MediaTek Helio X20 chipset backed with 4GB RAM running Android 6.0 Marshmallow. I have this feeling that it would be upgraded to Android 7, Nougat.

It also comes with a 64GB larger internal memory unlike other Tecno builds. Although, the Phantom 6 Plus does not come with an expandable external SD card slot. Rather, it comes with a Hybrid SIM setup – it allows you to choose to use one of the sim slots as a memory card slot. Hmm! That is quite impressive if you ask me.

The Tecno Phantom 6 Plus is set to come with fast charging, USB Type C (allows reversible plug orientation for charging other phones) technology. Phantom 6 Plus comes with a special feature which is its fingerprint reader and iris scanner technology. The Iris scanner will use your eye sensor (Iris) to control your device.

The camera is too premium to be true. It comes with 21MP back camera with dual flash. The front camera also poses an 8MP with flash. Other features found in Phantom 6 Plus are natively built in other devices.

3 responses to “Tecno Phantom 6 Plus Specifications, Reviews and Price”