I wrote earlier on how long it will take hackers to break your password using password strength meter. You can read it up before following this post.

Who is a hacker and what can he/she do?

A hacker is someone that breaks into another guy’s computer to steal information, data, encrypted passwords that is not his in other to jeopardize the prey.

This will lead to your account being locked after too many bad guesses.

Although, hackers can be officially sent but we are talking about the badass hackers. They are also known as Black Hat Hackers.

How can hackers crack my passwords?

Attempting to crack passwords requires lots of time and lots and lots of processing power.

Hackers feed their cracking software with numerous guesses of real words and then create rules to modify those words in the same way we do when we create passwords.

Through these, hackers can guess passwords at the rate of 1 billion guesses a second.

But how do they get to guess my password?

Hackers know that some words are used more often than others and they know about the similar combinations we mostly use.

Sometimes, they know or study who you are and what is common to you. Let’s take for instance;

Now, hacker will start arranging these words in his/her word lists and be ready for you. Some of these generated word lists can be;

Your password is likely to be cracked in less than 10 seconds if you fall among the practices.

So how do i make strong password against hackers?

It is not necessarily that you should know your password offhand. Having them in a text file stored on a plug and play device – flash is better.

For mobile phone users, you have text editors to save your passwords for future use.

When creating a password, try and use password meter to calculate its strength. Although, some of these password strength meters are not reliable since they give people the hope of creating strong passwords.

Take a look on how you can calculate your password strength.

The above can really be a stronger 16 bits password with tough combinations. This will be difficult for a hacker to start guessing. There’s no relationship between you and the above. It is naturally encrypted!

Even if your new password is going to be memorable, try it in this format

Less try to match these

Favorite numbers and special characters as 2098 and @#)& 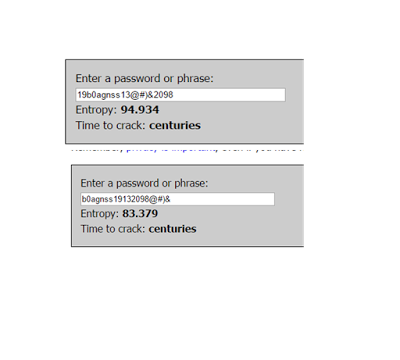 Great right?
You can figure out your own. I used Andrew Hedges experiment. Click here should you prefer it.
Via: Sophos