Does “Messenger Active Now” mean the person is active, busy or ignore?

To start answering this questions about Messenger active now one after the other, we would also like to let you understand the nitty gritty on how everything about being active or not on Messenger is.

The issue of a partner not being able to respond to messages by the other party has broken most social relationships on Facebook because they think they have either found someone else better than them, ignoring to reply their messages or cheating on them.

If you use an Android device, iPhone, Windows Mobile or any other smartphone ; they have a feature called background data sync.

So, as Messenger being an instant Messaging app, it need data to keep activities running in the background so that one can receive messages as soon they are sendt and delivered.

In this way, most people would prefer their internet data to be turned on even when they are currently busy with work or using the phone as a working companion but not for chat. You will see them as active on Messenger but they are really active at the moment.

A situation when Messenger Active Now is a big mess 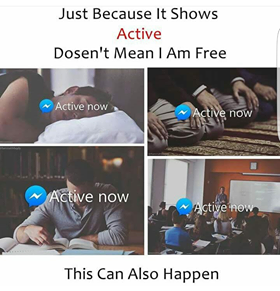 When someone claims that he or she is busy at work on a PC or Mac while Facebook tab is opened could be tricky.

It is true that some people work on Facebook being Page managers, content managers, ad agents and writers for Pages.

But when someone is none of the above has Facebook opened in a tab while working on MS Word,Excel or some data collection software then it is an abuse.

It is called cyber-loafing. If your work has no connection with Facebook but your browser tab has Facebook opened or minimized, then you will be seen as Active now. They are messing with your messages.

If someone works on Facebook, there’s an option to turn off chats or active now. It quickly separates you from the online list. Then if not, they are either cheating or a new date.

A situation when Messenger Active Now is really busy

Messenger introduced Ignore message and it has controlled the way you communicate with your friends.

So when all your messages has kept being seen sent or light blue checkmark even when you still see them active, it could be that they have moved your to ignore list.