Facebook has introduced Ignore Messages feature in its Messenger platform in order to create a preferential priority in who connects their users.

What this Messenger Ignore Messages (formerly Connection Requests) does is that it moves messages that have been marked as ignored into its folder.

Meanwhile, there is a similar feature on Messenger called Filtered Messages. Filtered messages is similar to Ignore Messages.

In Messenger, older messages that have not been read are marked and moved to Filtered Messages. They almost share the same feature of our conventional SPAM folder in email clients.

You will learn the following in this article;

The two main features of Ignore Messages is to add messages that have been marked by users into its folder and also to intercept new messages from people that are not in your friend lists.

This means that any new messages from people that are not currently in friends with you will be moved to Ignored Message list until you decide to accept them.

Once you accept any message from someone that is not in your Facebook friend list, automatically they become your Messenger contact. Their messages start appearing on your inbox folder.

How do I Ignore someone on Messenger?

You can alternatively do it this way;

What happens when you Ignore messages on messenger

When you ignore messages on Facebook, the message will be moved from your main Messenger home (inbox) to Messenger ignore list.

You will not be notified by any future messages sent from the person. The messages will be shown when you navigate to Messenger ignore list. 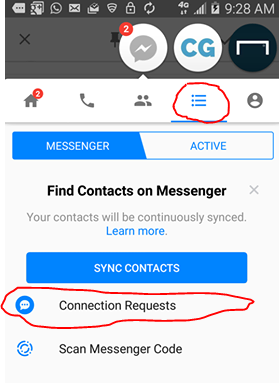 You can cancel any messages that you have ignored on Messenger. We have written a simple guide to cancel messages. Follow the below steps

Will someone I add to Ignore Messages notice what I did

When you have ignore messages on Messenger, their messages won’t be delivered. Their messages will only be marked as sent (a single light blue checkmark) indicating it has been sent only.

Although, they will still see you as active whenever you are online indicating that you are still Messenger contact.

How they will notice is that since their other messages to other friends are delivered and read except yours, normally they will think that you have intentionally ignored them or what we call snub.

How do I check If I am being ignored on messenger

After all days of no message deliver and non-read messages even when you still see them active always then it is simple to assert that your messages have been moved to ignored list.

Note: If this issue persists, be rest assured that most times, the Facebook server breaks down. It can takes minutes, hours to get back to normal. You only need patience.

I'm passionate to helping people solve their challenges online. I can help you with everything about mini importation, order for you, pay your supplier in Yuan, social media marketing etc. Learn more from my website freightya.com. Feel free to connect me on social media below.

10 replies on “What does Ignore Messages means on Facebook Messenger 2021?”

Thanks! Finally some article, where isn’t written the same (for my case unuseful) information as everywhere else.

This doesn’t answer my question. On Messenger, the Facebook website version I access on a PC, for some Facebook profiles, you click on “options” and one of the options is “ignore messages,” and for some profiles, the option of “ignore messages” is not there. What is the difference? Also, I can’t go by the fact that my message just indicates it was sent and nothing else, because I can think of one profile where the person has not posted anything in months, so maybe she just hasn’t seen my message yet. I don’t know. How many people only have time to check Facebook every couple of months? Where I’m suspicious is that “comment” and “like” are not on her profile anymore. Does that mean she’s blocking me? Also, I have seen notifications on Messenger that a message has been read, but I just finished a conversation with someone on Messenger in recent days where they obviously read my message, to respond, but I never received that “read” notification. So, can I tell that someone is ignoring my messages by whether “ignore messages” appears in their options or not?

I think the ‘Ignore Messages’ option is only available on the profile if you have an actual message thread going with that person. If you don’t the option won’t be there. Also when the message is read it is a picture of them. If the message is not ‘delivered’ it means that their device or messanger app has not connected with fb server and it is actually Not delivered. This is completely different from ‘read’.

What if this “ignored” friend will try to call? Will my phone ring, or will messenger say that we are unable to connect?

Your phone will ring. Ignore is just like Spam box in email.

what happen if both of you ignore each other on messenger?

This happened to me and I cant unignore or reply. Dont know how to reverse it as we have both ignored 😒
Do we have a solution so I can message them again?

yes you can reverse it. 1. Open Messenger, 2. tap on your profile picture, 3. tap on message requests. Then you can unignore the person