How to fix “Screen overlay detected” on Android

Screen overlay most times gets some folks pissed off. I have seen someone that actually thought that the overlay stuff was a sign of malware on his device. This is actually a part of Android permission feature that grants apps priority over other apps. 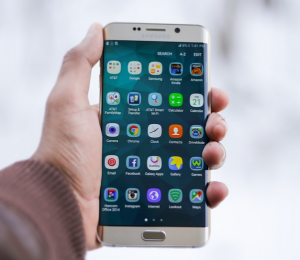 There are two options to go about turning off screen overlay. Naturally, one has to move over to device Settings and start figuring out which app is the cause. Here, the recently installed or updated apps become the case. What one does is removing almost every screen over permission on all apps until one finds out which app does it.
It is sometimes frustrating finding out which apps triggered the reaction. It is not always clear precisely which app is trying to use screen overlays. The simplest way now becomes installing a third party app from Play Store for fastest fix.
Here we go 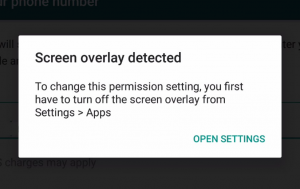 1.  Using Android Settings
For Samsung
For other Android phone
2.  Using Install Button Unlocker
To change this permission setting using Install Butoon Unlocker, you first have to turn off the screen overlay from Settings > Apps
You should be able to do away with that irritating pop up using any of these options above. If it does not work for you, kindly comment and I will reply you almost immediately. Don’t thumb us down!

How To, screen overlay

6 responses to “How to fix “Screen overlay detected” on Android”